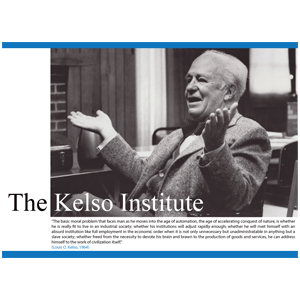 Louis O. Kelso (1913-91) was a political economist in the classical tradition of Smith, Marx and Keynes. He was also a corporate and financial lawyer, author, lecturer and merchant banker who is chiefly remembered today as the inventor and pioneer of the Employee Stock Ownership Plan (ESOP), the prototype of the leveraged buy-out which Kelso invented to enable working people without savings to buy stock in their employer company and pay for it out of its future dividend yield.

Kelso invented the ESOP in 1956 to enable the employees of a closely-held newspaper chain to buy out its retiring owners. Two years later Kelso and his co-author, the philosopher Mortimer J. Adler, explained the macro-economic theory on which the ESOP was based in The Capitalist Manifesto (Random House, 1958). In The New Capitalists (Random House, 1961), the two authors present Kelso’s financial tools for democratizing capital ownership in a private property, market economy. These ideas were further elaborated and refined in Two-Factor Theory: The Economics of Reality (Random House, 1967) and Democracy and Economic Power: Extending the ESOP Revolution Through Binary Economics (Ballinger Publishing Company, Cambridge, MA, 1986; reprinted University Press of America, Lanham MD, 1991), both co-authored by Patricia Hetter Kelso, his collaborator since 1963.